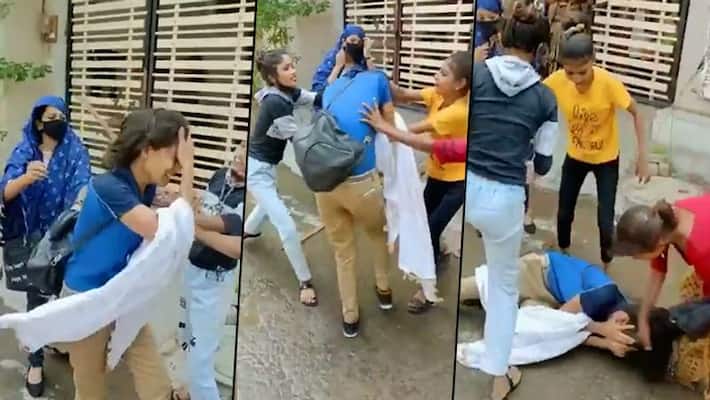 Hello friends, a very embarrassing video has come out from Indore, which is now going viral on social media niece and is being fiercely criticized. Yes, friends, for your information, let us tell you that in Dwarkapuri, Indore, the lady gang thrashed a young woman on the road. Let us tell you that this incident is of Saturday, the video of this whole incident was made by none other than the girl from her phone, which has now gone viral on the internet. The gang leader of the girls roams with the miscreants of the area. , and Aaye beats up with someone or the other, Indore Police has swung into action after Domino’s Pizza Delivery Girl Beaten Video went viral, now the search is on for the four girls seen in the video.

For your information, let us tell you that according to TI Satish Dwivedi, on the complaint of Nandni Yadav resident Rishi Peles Colony, a case has been registered against Pinky and her three other friends living in the same colony under sections of assault. As can be clearly seen in the video, the girl being beaten up is wearing a Domino’s dress, that is, the girl works as a delivery person at Domino’s Pizza. The victim girl told that she was going to the job on Saturday. During this, Pinky and her three friends blocked the way, the three girls called her to them, and suddenly started hitting her with slaps, kicks and sticks, due to this sudden attack, the girl fell on the ground. But despite this, the four girls kept on beating.

Domino’s Pizza Delivery Girl Beaten Video was made by none other than Lady Gang and made their phone viral on this social media, which makes it clear that these girls have no remorse for their actions and neither do they fear the law. Is. When the viral video reached Indore Police, they took cognizance of this video. After investigation, it came to light that Pinky’s father has also been involved in illegal liquor and illegal activities in the area earlier. At present the police is looking for the accused. What is your opinion on this video?